At the very beginning of the COVID-19 pandemic, Getty’s software team has started to work remotely and were discussing ho to keep our team connected. We decided to work together on small digital experiments as a way to be together without the pressures of deadlines, requirements, and stakeholders.  Selina Chang-Yi Zawacki, one of our engineers, mentioned she’d found an open-source tool that let people import photos into the Nintendo Switch game Animal Crossings: New Horizons. She thought it might be interesting to bring Getty’s artwork into the game. 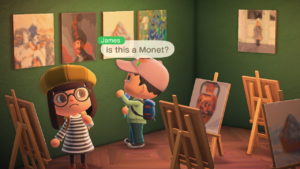 This was an obviously amazing idea. Over the course of a week and a half, we built a single-page “experiment” called the Animal Crossing Art Generator that did just that.  Users could search for an image in the Getty Museum’s Open Content collection, select a region of that image using an on-screen cropping tool, and  generate a QR code that could be scanned and imported using Nintendo’s website into their Animal Crossing game.  We also provided “ready-to-use” images for people who  weren’t sure what they were looking for.

We worked closely with our social media team who helped us find a voice that balanced Getty’s institutional tone and the whimsy of Animal Crossing. They also helped develop a tutorial for users, explaining how to follow Nintendo’s complicated, multi-step process of loading the artwork into their game.

We also made the Animal Crossing Art Generator usable with any open content images available through the International’s Image Interoperability Framework, better known as IIIF. This might not be a feature the general public would take advantage of, but we also knew that within the cultural heritage community there were people who would champion this. Kristen Carter, our UX designer, found a way to let those in-the-know use it, that wouldn’t confuse the general public, but let people share links that pre-load their artwork from any IIIF collection.

Over the past year, over 250,000 images have been created using this tool—including 10,000 unique images NOT from Getty’s collection, but from other institutions. We’ve also seen other institutions use the tool in innovative ways—V&A highlighted their wallpaper collection, the National Science and Media Museum provided direct access to it from their website, and other institutions like The Met developed their own implementations.

And more importantly, hundreds of thousands of people now have amazing works of art in their own, virtual homes—works that they chose and can do with what they like.