#everynamecounts – An initiative of the Arolsen Archives

Make sure their names will never be forgotten! Together with thousands of volunteers from all over the world, the Arolsen Archives are building the largest digital memorial to the victims of Nazi persecution. A living memorial with a strong presence in today´s society. Not only because it is our responsibility to remember the victims, but also because their stories are relevant now. The prejudices that lead to persecution are not history – they are still widespread today. 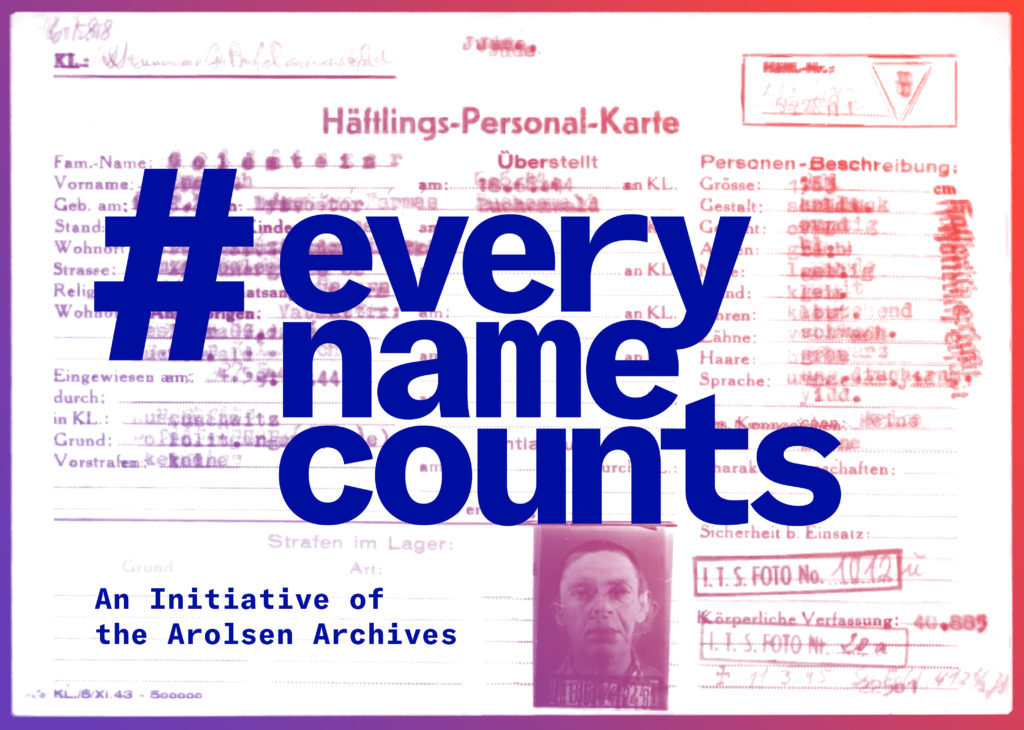 It is important that future generations remember the names and identities of these victims, because by looking back at the past, we can see where discrimination, racism, and antisemitism can take us. Remembering and commemorating the victims of National Socialism often involves formal rituals that do not resonate with younger generations. The #everynamecounts initiative enables people to relate their own lives to the fates of the victims on both a personal and an emotional level. This offers a new and very direct way of actively engaging with the past – not only to remember the victims of Nazi persecution, but also to promote respect, diversity, and solidarity.

In essence, #everynamecounts aims to collect and present victims’ names and other relevant data contained in our documents in a way that creates a space for public remembrance. The first step is to index the data on the documents, the second is to make them available in our online archive. The #everynamecounts crowdsourcing project enables people all over the world to access the information and search the online archive themselves. A living memorial that is growing all the time and is an invaluable resource for researchers and teachers – and for the families of the victims.

Various institutions including UNESCO, the Auschwitz-Birkenau State Museum, and Anne Frank House in Amsterdam are partners in the #everynamecounts initiative. The United Nations support the project.

The Arolsen Archives are the world’s most comprehensive archive on the victims and survivors of National Socialism. The collection has information on about 17.5 million people and belongs to UNESCO’s Memory of the World. Many millions of names can already be searched online. But there are still many more to go. Indexing them and making them available online is a huge task. This is why we launched the #everynamecounts initiative and why we are reaching out to people from all over the world for help. Whether you have ten minutes or ten hours to give, anyone can contribute and spend as much time on the project as they like.

We are making thousands of documents from various concentration camps available for the crowdsourcing project. They include a large number of prisoner registration cards and prisoner registration forms that contain important data and biographical information such as prisoners’ places of birth. Some documents include the names of prisoners’ relatives too –a name written on a document is sometimes the last trace left of a person before they were murdered; places of extermination such as Auschwitz-Birkenau or Majdanek are sometimes listed as the “places of residence” of prisoners’ parents or siblings.

The project will continue until all the documents in the Arolsen Archives are available in the online archive. In addition, the Arolsen Archives will provide smaller organisations with support in digitizing their records and will act as a hub for all data related to Nazi persecution.

The “reasons for persecution” that the Nazis recorded on the concentration camp documents are a stark reminder that the prejudices that led to persecution during the Nazi period still exist today. “Every piece of information that is newly digitized is an expression of solidarity with the victims,” emphasizes Floriane Azoulay, Director of the Arolsen Archives.

The project’s power lies in its community: Volunteers from all age groups and from all over the world are building the digital memorial together. All they need in order to take part in the initiative is a computer and an internet connection – no specialist knowledge is required. 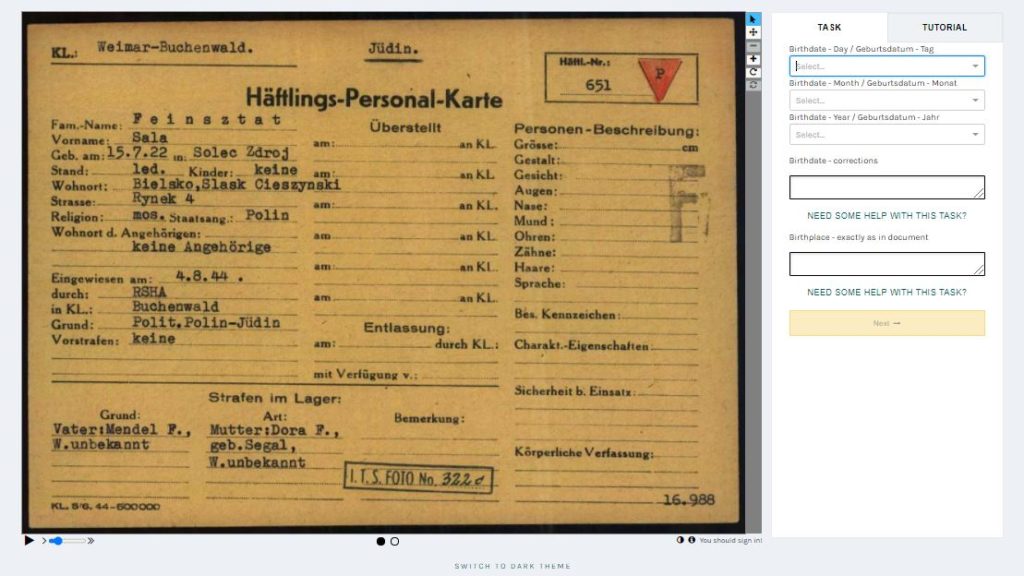 Volunteers transcribe the names and data from scanned historical documents and enter the information into the GUI on the crowdsourcing platform. They are guided through the archival documents on the crowdsourcing website which displays help texts to provide assistance. How easy it is shows Deputy Head of the Archives, Giora Zwilling, in this video. We prepare document packages, so-called workflows, each of which contains documents of a specific type. Different levels of difficulty ensure that anyone can take part, the layman is just as welcome as the professional historian. The data from each document has to be typed out three times before it can be transferred to the database at the heart of our online archive. Various automated and manual checks are carried out by Arolsen Archives staff to ensure the quality of the digitized documents at every step of the way.

To provide volunteers with further support, the Arolsen Archives also developed a digital introduction to help them get started. In only 15 minutes, volunteers acquire background knowledge about the history of Nazi persecution and learn more about what our archival documents mean. They can also practice the process of data acquisition, i.e. “indexing,” on a trial document.

Additional, in-depth information about the documents and about Nazi persecution can be found in our digital e-Guide. A range of supplementary materials are also available on our website.

Anyone can take part in the crowdsourcing project #everynamecounts and digitize documents from concentration camps without even leaving the house.

History and milestones of #everynamecounts

We launched #everynamecounts as a pilot project in January 2020 with around 1,000 school students. When the coronavirus pandemic led to the cancelation of events to mark the 75th anniversary of the liberation of the concentration camps in May, we worked hard to open the project up to the public in April, and a growing number of people in various countries joined the #everynamecounts initiative. By December 2020, more than 10,000 registered users had digitized over 2.5 million documents. In this interview, we look back on the first year of #everynamecounts.

Based on the great success of the project’s first year, we started an international campaign in January 2021. To reach even more people worldwide, three new languages have been added: in addition to English and German, the project and all the information that goes with it is now also available in Spanish, Polish, and French. Another new feature of the international caompaign is the digital introduction, a tool that makes it easier to get started with #everynamecounts and is also suitable for use in the context of school projects.

On January 27, 2021, International Holocaust Remembrance Day, the number of participants went through the roof: 90,000 documents were indexed that day and 1,800 messages were sent by the community on our crowdsourcing platform. Up until March 2021, about 18,000 registered volunteers have already taken part – an 80% increase since the end of the first year.

To launch the new campaign and raise awareness for #everynamecounts, we worked with the media artists from URBANSCREEN to develop a multi-media installation. In January 2021, the façade of the French Embassy in Berlin was transformed into a huge screen. 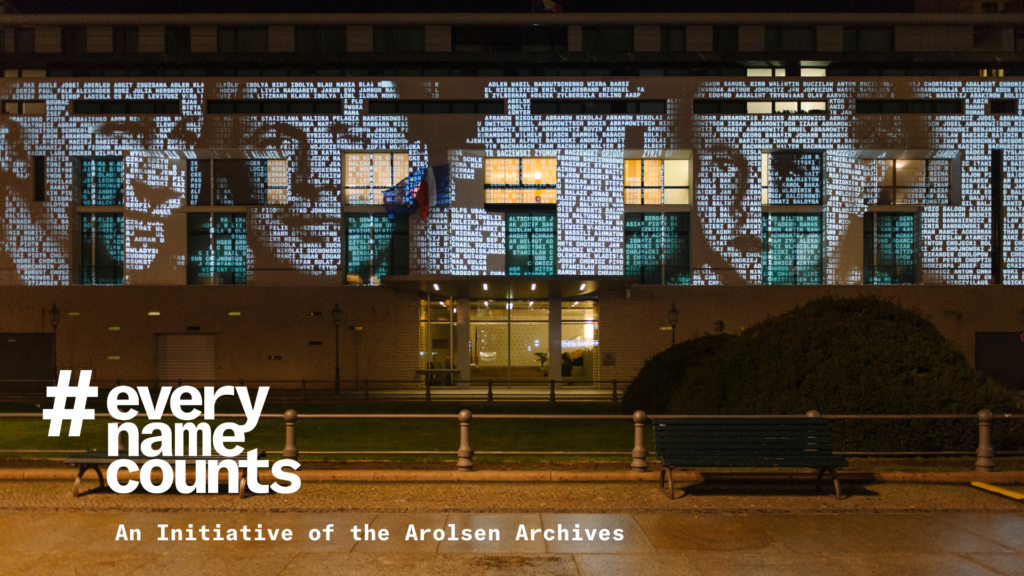 The evocative media installation marked International Holocaust Remembrance Day on January 27 and brought remembrance into the here and now. The names of victims of the Nazis were projected onto the Berlin cityscape and into the public consciousness, along with the #everynamecounts crowdsourcing initiative. Our followers and volunteers from all over the world were able to be part of the event by joining the live stream. This media installation appeals to the public to support us in the #everynamecounts project.

What do people say about #everynamecounts?

“This project, whilst unbelievably sad for me as a Jew, is a way for me to be productive and helpful. If I was researching a relative lost in the concentration camps, how thankful I would be to actually find their name and know that their life mattered.”

“I will emerge from this project much more educated, in many different ways – thanks!”

“We can almost feel what they must have gone through.“ 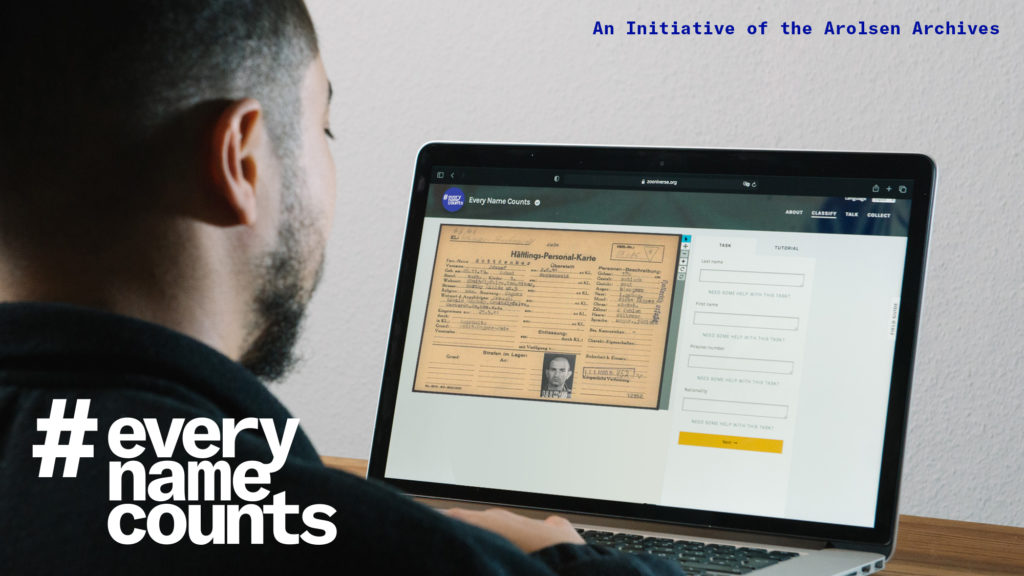 These are only a few of the impressions that our volunteers have shared with us in comments left on the crowdsourcing platform. Working with the documents of individual victims enables volunteers to relate much more closely to their fates. Each victim is brought into the present and remembered by the volunteers. It is this intimate emotional connection that enables #everynamecounts to make a lasting impression and initiate a process of reflection and learning.

The sense of community created by working together to build the digital monument is an important pillar of the initiative. The volunteers collectively commemorate the persecutees  and immerse themselves in their biographies. As the number of volunteers grows, their diverse backgrounds foster team spirit. “I love to collaborate with other volunteers,” remarks for example Carla Berkout from the Netherlands in an interview with us. “For me, this is the most rewarding part of the enc-project: the interaction with the other participants.”