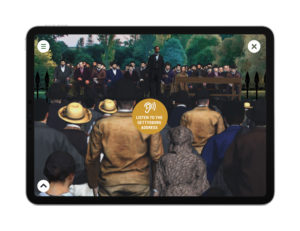 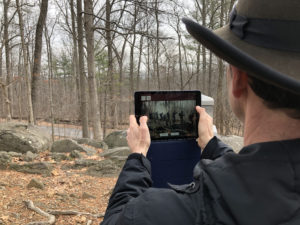 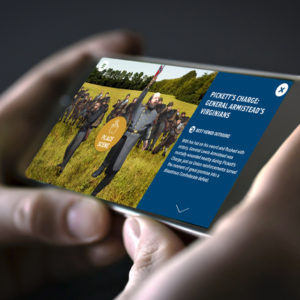 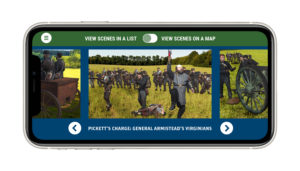 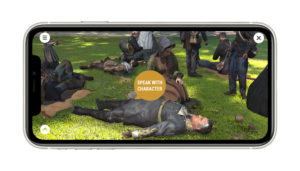 The Gettysburg AR Experience features six unique scenes from the Battle of Gettysburg. The scenes are historically accurate and include 3D animations that are based on archival photographs and first-person accounts. By using augmented reality, the app allows users to walk up to and interact with the people, animals and objects that are integrated into each scene. Unlike watching a video or viewing a photograph, the Gettysburg AR Experience allows users to walk into the scene and look at the people, horses, and objects from all angles. It’s a truly engaging and immersive experience.

Users can choose from among six events that shaped the Gettysburg battle and secured its place in history including Pickett’s Charge and The Gettysburg Address. Each event is introduced with background information including a detailed map of the location where the action took place in Gettysburg. Users are given on-screen instructions on how to place the scene, either outdoors or indoors, and tap the screen to begin interacting with the 3D animation.

Each scene includes one or more characters who are designated as ‘ambassadors’ for that event. A rotating triangle above the ambassador’s head is touchable and begins the conversation. The ambassador turns toward the user and talks about the situation they find themselves in using clear audio. The scripts were prepared by ABT’s Chief Historian and reflect the language and sentiments current in 1863. The details included in these scripts are surprising and open a portal to the past that is unique and very memorable. Each ambassador has one or more comments to tell the user. All comments can be repeated in order to share the experience with other members of your group.

Each scene has one or more rotating diamonds appearing among the characters and objects. Users can touch a diamond on the screen to learn important information about the event or specific details located nearby. This approach draws users further into the 3D animation by pointing out interesting elements they might otherwise miss. The 3D animations are very lifelike and movement throughout each scene creates a compelling experience. ABT’s educational goals are enhanced by offering historical information within the context of an immersive scene that will allow users to process the content effectively and remember the details later on.