We can be the neighbors of the artists or live in the same house as the museum, but not to know it. And the work of the Vasnetsov brothers, Pavel Korin and Anna Golubkina surrounds us every day: in the subway, in parks, in buildings, which we run by on business. Choose one of the artists and become his “neighbor”
at least for a few minutes! 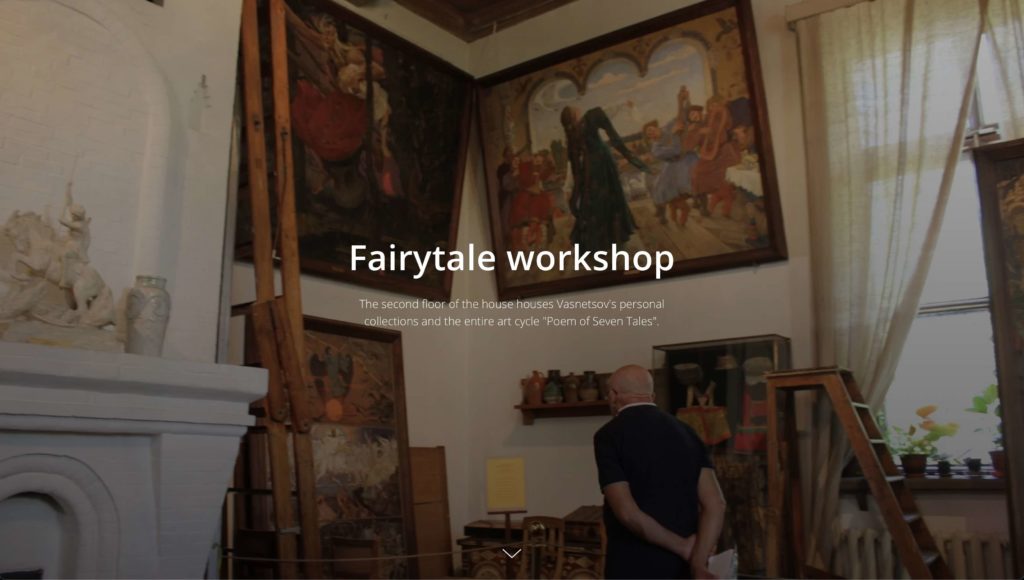 This is the site of small museums of the Tretyakov Gallery (museums-houses and museums-apartments of P. Korin, A. Vasnetsov, V. Vasnetsov and A. Golubkina). We talk about the main milestones in the work of these Russian artists of the 20th century and everything that surrounds their work.

Before you is a network of art that covers all of Moscow and the nearest Moscow region. The whole city is a museum! It is enough to look around to see the beautiful. 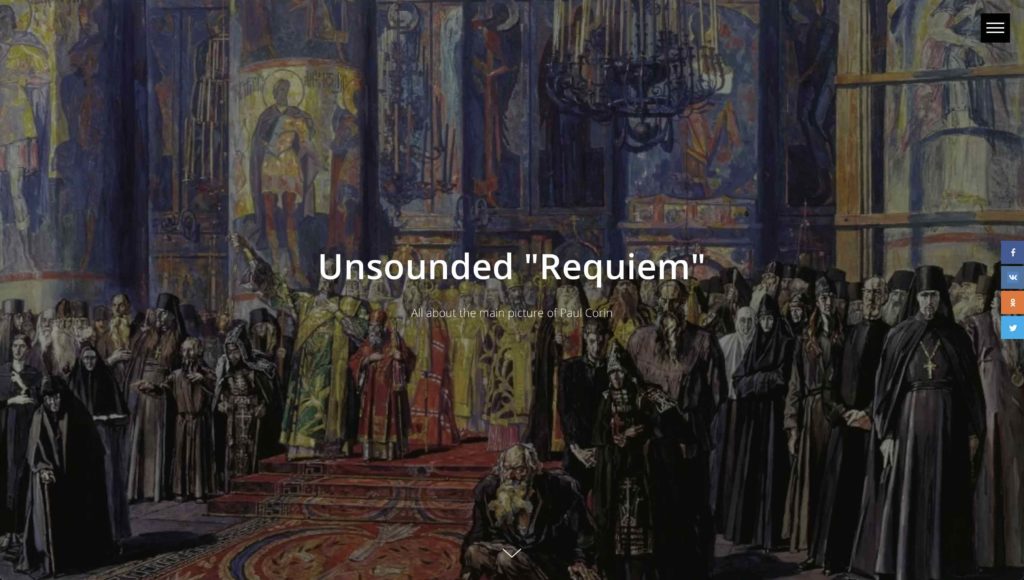 For example, the stained-glass windows at the Novoslobodskaya metro station and the mosaics at Komsomolskaya were created according to the sketches of the artist Pavel Korin. He was an amazing person: he collected icons, painted portraits of Soviet leaders (for which he received the Lenin Prize), directed the restoration workshops in the Pushkin Museum, and worked for more than forty years on the main picture of his life. We will tell you about his fate and work. See the chapter “My Neighbor — Paul Korin”. 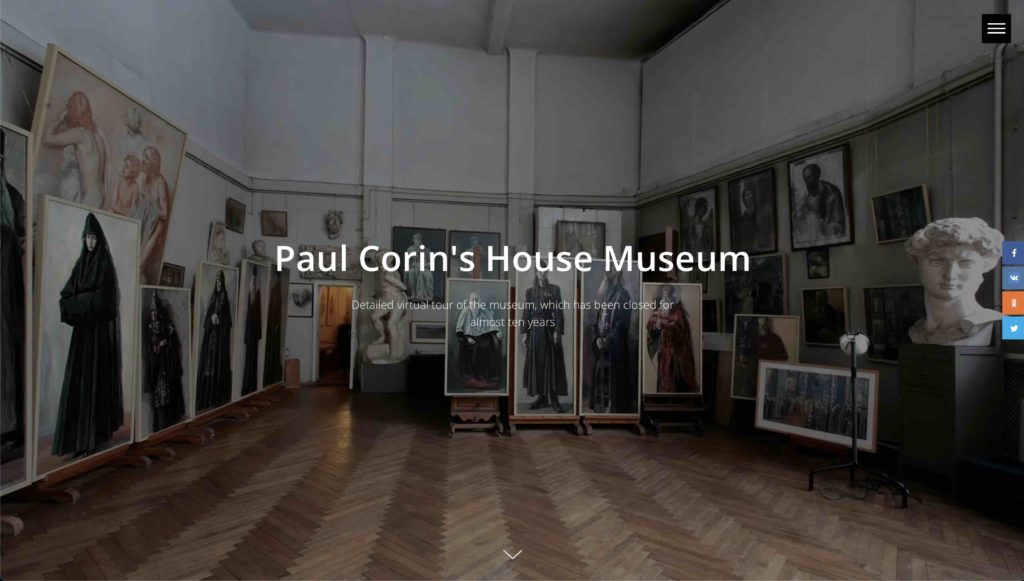 Apollinary Vasnetsov (not to be confused with his brother Victor) studied the history of Moscow and its embodiment in architecture. He also explored the clouds – you can see the picturesque result of observations in his museum-apartment near Chistye Prudy. There is also a unique collection of furniture created according to the artist’s sketches. 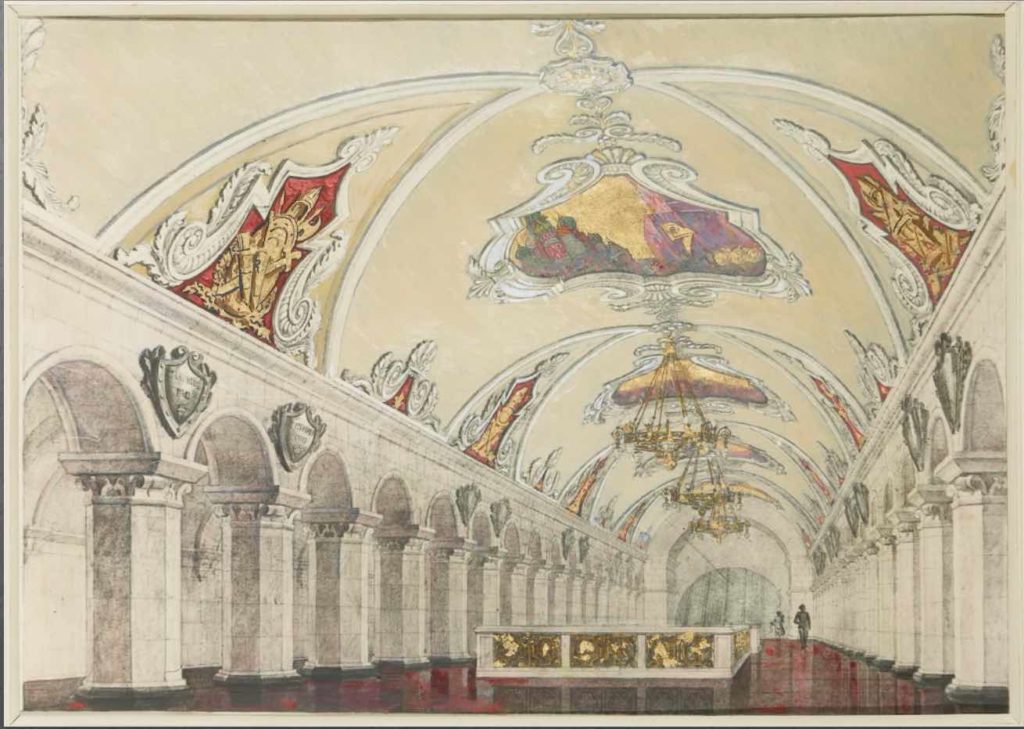 Do you think these are stories only about artists from other eras and times? No! Look at the neighbors of the Korin Museum who maintain stained glass windows in a residential building, at a real collector and collector who lives above Apollinarius Vasnetsov’s apartment, real schoolchildren who come to Teremok to see Viktor Vasnetsov or a restorer at Muzeon, a museum of modern art that has been engaged in restoration for 20 years sculptures by Golubkina – all these are real, living people, museum neighbors, just like you and me.

Choose an artist neighbor and go on a journey through his work!

Tatiana Gafar, Head of the Small Museums Development Service of the Tretyakov Gallery:
It was clear that the Small Museums of the Tretyakov Gallery were not particularly noticeable in any space. We asked the students if they would like to take something and try to do it. And as part of their coursework, they came up with a concept for a site called “Museums Next Door” and we all said that this is great, we need this, it will help us. And after that, it was already decided that we are this graduation project, and we do not just want it to be completed, but so that it will then be alive, working and part of the large digital world of the Tretyakov Gallery. 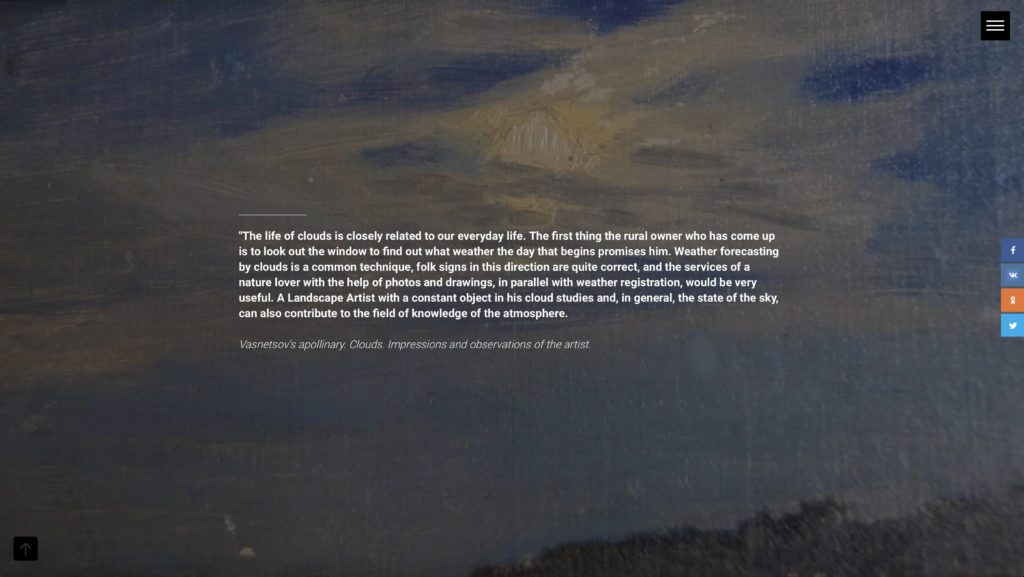 Marina Bannikova, graduate student of the HSE Master’s program, author of one of the projects of Small Museums:
Our project is such a full-fledged site, which has now become such a satellite site for the updated site of the Tretyakov Gallery. The site is divided into several parts, each part is dedicated to the artist. The story about the neighborhood was born from the fact that the Museum of Appolinarius Vasnetsov, it is located in an ordinary house on Chistye Prudy, where there is a museum apartment on one floor, people live on the floor above, and it seemed to us that this is a very interesting story and therefore we called the project “Museums Next Door”. 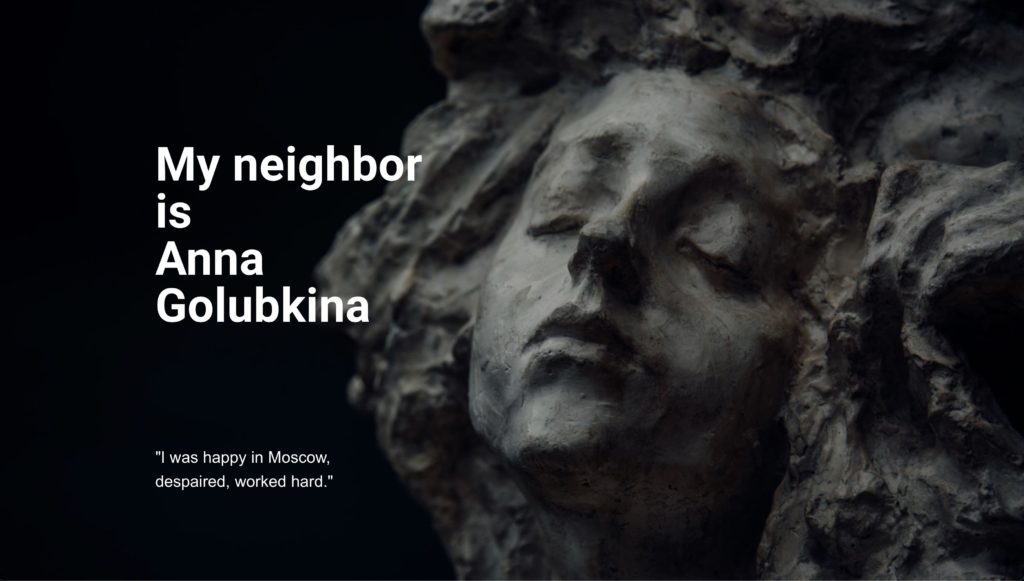 Anna Kachkaeva, Professor of the Department of Media, Director of the Center for Digital Cultures and Media Literacy:
Why is it important that students do such projects? Firstly, it is the link between generations, and secondly, it is the link between institutions. This is some enlightenment and an attempt to bridge the generation gap in understanding this very digital environment, its language and how you can communicate in it. 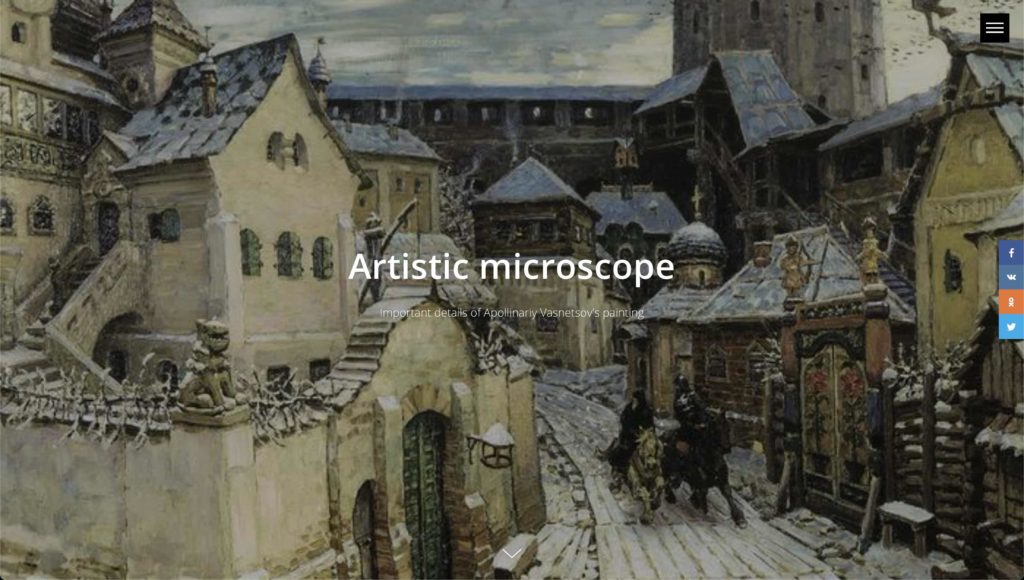 Marina Bannikova, graduate student of the HSE Master’s program, author of one of the projects of Small Museums:
Through the Vasnetsov Museum, with the Appolinarius Vasnetsov Museum, we wanted to make some interactive elements that could attract a person and make him go to this museum, already to see it all live. We took furniture from the house of Appolinarius Vasnetsov, which was also made according to his sketches, and made stickers with this furniture so that you can glue this chair from the Vasnetsov museum in a telegram to your photo and how to try on how it will look in the interior of your apartment … 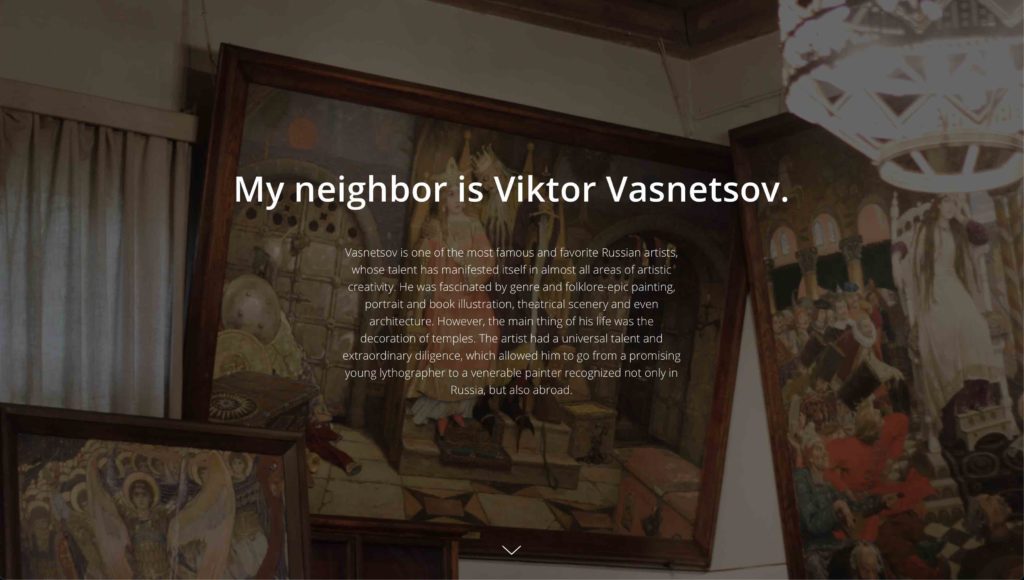 Tatiana Gafar, Head of the Small Museums Development Service of the Tretyakov Gallery:
If we are talking specifically about the digital world, about the digital environment, in my opinion a producer is badly needed, this translator is needed. When a digital product is created, it is very difficult for a researcher to reduce all this, remove unnecessary ones, and find the most important accent. In a digital product it is impossible as in a live excursion – today I have such a mood, and I will pay attention to this element of the picture, and tomorrow I have a different mood and I will say, but now look in the right corner. When content for a digital product is issued, you need to immediately decide, we are to the right, to the left, we are straight. 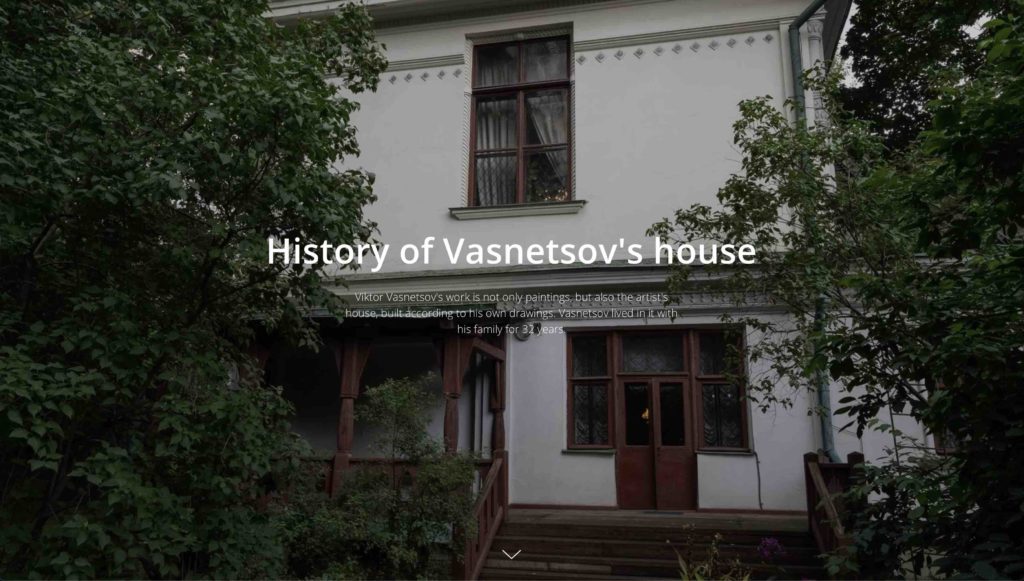 Anna Kachkaeva, Professor of the Department of Media, Director of the Center for Digital Cultures and Media Literacy:
And digital projects, and creative cultural industries, and this new multimedia language, it unites generations, spaces, universities and regions. And in general, in fact, it allows young people to feel the possibilities of a new creative profession, which is not exclusively closed, for example, to the editorial office or the media. It is much broader, and in a sense more useful, and is associated with a public good, which is a very important feeling for students – that they are doing something not just on the table, and not just educational projects. And it seems to us that this should be supported and promoted in every possible way.