The Science Museum Group Collection is little known. In 2018 the museum was substantially behind the sector for digitisation with only around 25,000 of the 425,000 objects illustrated online.

Since 2019, the Science Museum Group (SMG) has been undertaking a large-scale digitisation programme which will take the collection around 6% imaged online to approximately 60% of the estimated 425,000 objects. Thousands of objects are being published online each month. Inevitably, the accompanying catalogue records are frequently thin and the objects pick up pageviews online slowly through the primary discovery route: keyword search.

In January 2021, SMG wanted to celebrate reaching the milestone of 100,000 records illustrated online and take the opportunity to draw attention to the wealth of new content and to highlight the incredible diversity of the objects in this previously inaccessible collection.

Using the SMG’s collection API, SMG created a simple webpage, called Never Been Seen, that displays random objects with zero page views, meaning that users would be the first to view that object online. An image of this object was presented along with its inventory number. The image was pixelated, the colour saturation exaggerated and the colour hue rotated 180 degrees, which meant that it is usually hard to work out what the object is without following the link to the object’s collection online page. 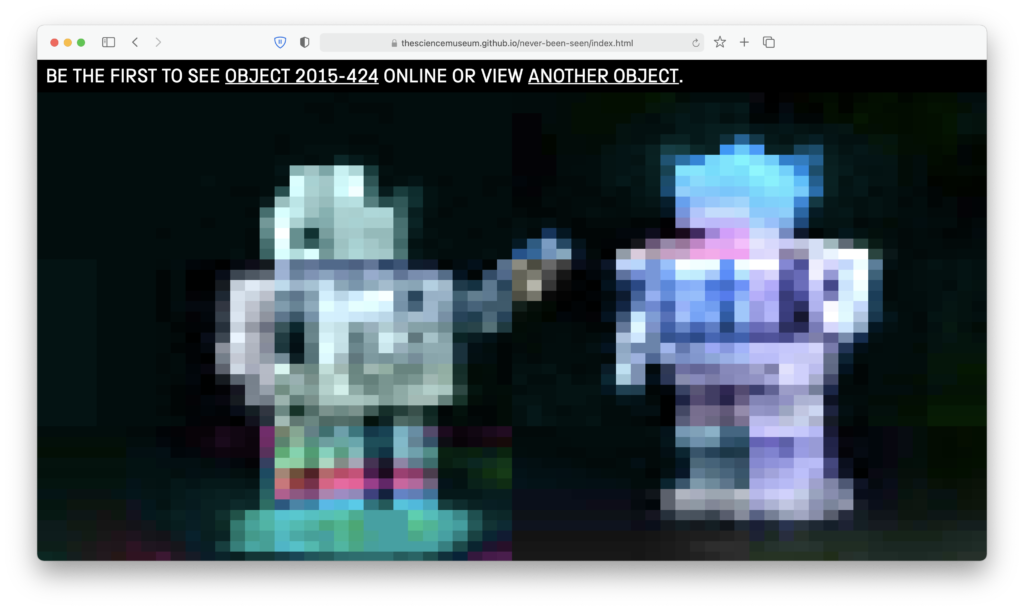 Never Been Seen was launched in a blog post on 7 January 2021. Over the following weeks, it went viral on social media, mailing lists, forums, blogs and newsletters. Never Been Seen was featured in the New York Times, de Volkskrant, Museums Journal, It’s Nice That, Hacker News, MumsNet, Virgin Radio, and Reddit. The project generated thousands of tweets and retweets, an enormous number of which featured users posting images of “their” object along with comments and links to the SMG collection website.

By the end of February, the Never Been Seen webpage had received 80,000 users and practically every unseen object had at least one page view. In January, visits to the collection online website jumped from around a monthly average around 100,000 sessions to over 212,000 sessions.

Monthly visits to collection website with spike in January 2021