The Glass Drawing Room allows visitors to step into the dazzling world of the 1st Duke and Duchess of Northumberland in this sparkling recreation of the glass drawing room at Northumberland House, London. Explore every corner of this now-lost interior and see the mirrored glass panels come alive in candlelight.

Designed for Hugh Percy, 1st Duke of Northumberland (1714-1786), by celebrated architect Robert Adam (1728-1792), the room was subsequently altered and finally dismantled in 1874, before the house was demolished. It has not been seen in its original form for 200 years, until now.

This VR experience was created as part of the exhibition In Sparkling Company: Glass and the Costs of Social Life in Britain During the 1700s, on view at the Corning Museum of Glass May 2021 through January 2022. An original section of the glass panels, on loan from the V&A Museum, will be on display in the exhibition. The Glass Drawing Room is a virtual environment designed to be installed in the exhibition gallery in direct relation to the surviving glass panels. The program was designed to run on the low-cost Oculus Quest headset, making it accessible to a broad pubic.

Elements making up the virtual environment were developed using a wide array of resources including the surviving glass panels, the architect’s original design drawings from Sir John Soane’s Museum, furniture from the Victoria and Albert Museum, and the collection of the Duke of Northumberland, as well as objects in the collection of the National Trust and the Corning Museum of Glass.

The goal of this VR project is to create a way for people to experience the room in its entirety, as historically accurate to the original installation as possible. It’s possible to see the existing spangled glass panels individually, or black and white photos and watercolor paintings of how the room was furnished in the 1870s, but it’s a fascinating and unique experience to be able to stand in the room, virtually, as it was when it was first built and appreciate the full 360°reflectivity of the space, the magnificent scale of the room, and its original sparkling splendor.

Challenges and highlights of the production process included:

As part of the virtual experience, you can see the mirrored glass panels come alive with reflections of candlelight – not something that’s typically seen in a museum (no open flames!) and breathtaking in this space. The VR experience recreates what has been unseen since the dismantling of the room over a century ago. Even with recent developments in VR technology, the room’s many reflective surfaces made lighting design difficult.

To achieve realistic looking candlelight in VR, developer John Buckley looked to film stills from Stanley Kubrick’s Barry Lyndon (1975), along with photographs of other rooms designed by Robert Adam at various points in the day to inform lighting choices. The result incorporates every individual candle having its own particular flame sequence from a database of over 300 options.

To produce the highest degree of visual realism, the developers employed the ray tracing rendering technique. Initial renders of the virtual space required multiple tries before finding success with accurate DirectX Raytracing (DXR) raytraced reflections in the mirrors, raytraced global illumination and raytraced shadows. This was the most significant challenge of the project, since in some views within the room, the large mirrors create infinite reflections. In the end, limitations were determined to limit the number of repeated reflections to make dynamic rendering possible.

In the Quest headset version of the VR, the renderings have been significantly optimized to only render what’s within the camera frustrum or what’s in front of you, allowing the multi-layered reflections to still function in the lighter weight operating system.

The project team undertook a significant amount of research to find the original room components lending to the accuracy of this virtual recreation. Kit Maxwell, curator of Early Modern Glass, and the Noho team traveled to the V&A to measure and photograph each of the room’s elements from every angle. At the V&A, the team documented the glass panel and door currently on display, glass panels held in storage, and a scale model of the room constructed by Lucy Askew in 2001.

A significant resource was the interior’s original design drawings by Robert Adam, of which digital copies were lent by Sir John Soane’s Museum.

Also in London, the team visited Syon House to document and photograph the original chimneypiece, reinstalled at Syon after the demolition of Northumberland House.

Since the original glass chandelier no longer exists, Kit sourced the best chandelier similar in size and style and led the team to the Assembly Rooms at Bath to document a chandelier by William Parker from 1771.

The cut glass girandoles are recreations of a pair from the Corning Museum collection that are in the exhibition. They replace the original candelabra, which no longer exist.

Lastly, the team consulted with Dr. Adriano Aymonino, of the University of Buckingham, who has conducted the latest research on the roundel paintings found on each wall within the room.

Within the collection of the Duke of Northumberland at Syon House are many of the original furniture pieces from the Glass Drawing Room. Having access to photograph, measure, and fully document these pieces was essential for recreating them in the virtual space, but there was also an exciting discovery spurred by our research trip. When the team found the furniture in storage, it was in rough shape. The upholstery that had been put on during the 1820s had begun to peel away. What this revealed was the original upholstery which had not been seen for over a century! The original was very different than what was sketched in design drawings and from any existing photographs of the room. 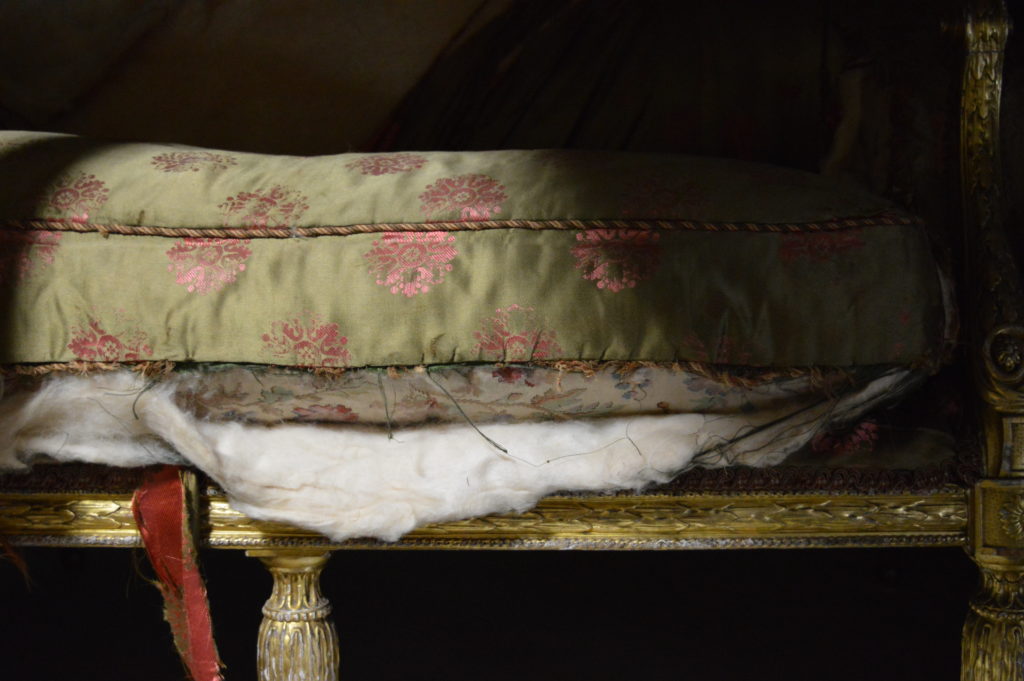 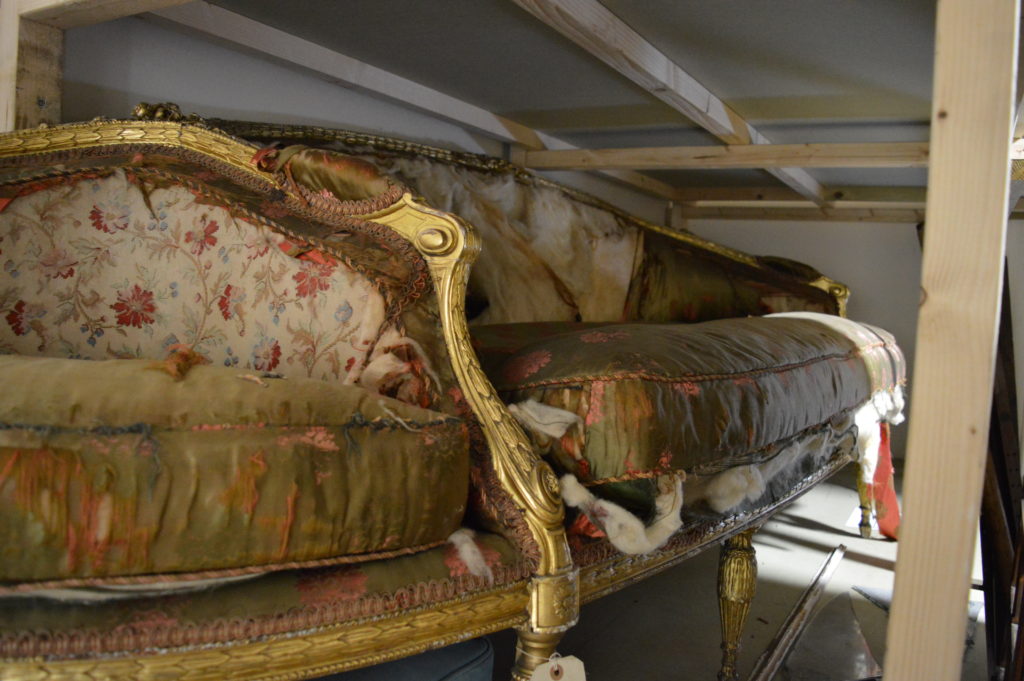 However, this reveal presented a challenge for the VR developers. The upholstery was a woven fabric of multi-colored flowers on a light cream-colored background. When translating the pattern to the digital space, the almost checkered-looking woven texture translated to appearing pixelated within the rendering. Luckily, a texturing solution was found, and we can now see the original furniture, with its original upholstery.

Bringing the room to life

This VR project was developed in Unity. It is a real time experience – allowing the user walk and move around the room as they’d like or use the controller to jump to any point.

Because the period of the room relied on natural or candlelight for illumination, users have the ability to switch between experiencing the room in daylight and candlelight, through two designated hot spots in the back corners of the room.

To recreate the ambiance of the glass drawing room as it would have been in preparation for one of the Duke and Duchess of Northumberland’s parties, we added sounds to help bring the room to life. Custom 3D spatial audio allows you to hear the logs crackling in the fireplace and enjoy a period music piece drifting in from the door open into the adjoining room. The music, specially composed by Tom Hambleton of Undertone Music, is also used to soundscape the exhibition at the museum.

The VR experience was intended to be presented to the public on Quest headsets in the museum’s exhibition gallery, with a dedicated staff person there to assist in navigating the VR and working the headset. As an added feature for both accessibility and for those who might not have wanted to use the headset, there would also be a large screen with a touch interactive version of The Glass Drawing Room as well. The COVID-19 pandemic not only postponed the exhibition’s opening, but also made the team reevaluate the delivery of the VR experience taking health safety and public willingness to touch shared surfaces into concern. The solution determined was to forego providing the headsets in the gallery, and instead focus on the touchscreen. The museum will now provide disposable stylus pens to safely navigate the touchscreen, while eliminating shared touchpoints.

With the new focus on the wider public distribution of the VR outside of the gallery-based access, and more time before the opening of the exhibition, the team committed to producing a real time experience in addition to the 360° video derived from the virtual rendering.