Wilhelm and Karl Maybach were visionaries whose accomplishments set the stage for the ‘mobility revolution’ of the early 20th century and inspire innovative advances to this day. Their achievements have shaped society, revolutionized mobility, improved transportation industries around the world, and set the ground for the quality of life we enjoy today.

The Maybach Foundation, founded in 2005 by Karl Maybach’s grandson Ulrich Schmid-Maybach, has made it its mission to showcase the Maybach legacy of innovation and design heritage and offer mentoring programs to inspire innovation. A key aspect of our work is raising awareness for the iconic Maybach innovations, groundbreaking achievements in engineering and design, as well as methodologies that made Maybach an innovative powerhouse in the 20th century.

As we are paving the way for the next, ‘electric’ chapter of mobility, it is crucial to remember the great pioneers and innovators whose achievements empowered the world to experience mobility ‘by air, by water, and by land’ for the first time. This mindset constitutes one of the key motivators driving the development of the innovative Maybach Virtual Museum which was just launched in February 2021 – a project initiated, funded, and proudly developed by the Maybach Foundation teams in San Francisco, USA, and Friedrichshafen, Germany.

Over the course of five years, the Maybach Foundation’s team in Friedrichshafen has developed a comprehensive and unique collection of historical Maybach documents, artifacts, photographs, and contemporary eyewitness accounts, objects, and exhibits. Using innovative software, preparatory work for the Virtual Maybach Museum summing up the research results started in 2020 with the goal of identifying a platform that has the potential of serving as a long-term solution to present a one-of-a-kind, state-of-the-art holistic Maybach collection. This solution was subsequently ideated and developed in tandem with the Maybach Foundation’s San Francisco team and web-development experts from around the globe. Over the course of roughly 6 months, the Virtual Maybach Museum was custom-built in order to guarantee a dynamic site that could be extended and further developed as new historic artifacts are being found and documented. 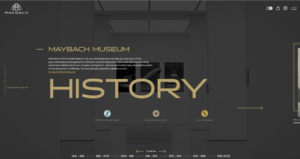 Content
The Virtual Maybach Museum tells a story unknown to most. We start at the beginning of individual mobility, made possible only because of Wilhelm Maybach’s tinkering mindset and talents in the areas of draftmanship and engineering. We then proceed with the large high-performance engines developed by Karl Maybach which powered airships, trains, and ships – just to name a few. Visitors are guided through the history of the ‘Maybach

-Motorenbau-GmbH’ (‘Maybach Motor Works Company) in Southern Germany before learning about the continuation of the Maybach legacy via MTU GmbH and the Mercedes-Maybach sub-brand, both of which still exist today. The story arc concludes in modern developments, such as the increasing innovations in the fields of e-mobility. Contemporary eyewitness accounts from the Schmid-Maybach family, as well as locals from the town of Friedrichshafen, where Maybach Motorenbau GmbH was located, complete the picture.

The Virtual Maybach Museum is almost exclusively custom-coded and sets the status quo in the world of virtual exhibitions. It was important to us that the quality of the site matches the story told in its contents – as Wilhelm Maybach stated: “What’s good must also be beautiful”. The large engines displayed on the site are a somewhat abstract subject matter as most of our visitors have never seen engines this large in-person. To give an adequate impression of the sheer size, we focused on providing reference points in form of human silhouettes. To communicate the aspect of spatiality, visuals are rendered in different sizes allowing us to give the impression of showing them further in the fore- and background.

An overview of the biographies of Wilhelm and Karl Maybach, their accomplishments, and their groundbreaking impact on the history of mobility had not been available online. Especially Wilhelm Maybach’s inspiring life story from being placed in an orphanage at age 10 to being crowned the “King of Designers” roughly 30 years later is being properly told for the first time ever.

The Virtual Maybach Museum adds itself to the ‘list of firsts’ carrying the name Maybach. 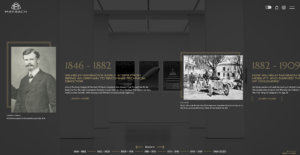 A multi-layer approach allows visitors to gain a fast and user-friendly overview while also opening door to deep dives into specific topics and timeframes. The exhaustive ‘Learn More’ sections provide background information through lengthy descriptions and visuals. This structure enables users to choose between ‘at a glance’ and ‘in-depth’ experiences – just like a brick-and-mortar museum would. Carefully curated design elements, such as the gallery-like backdrop, provide a true and comprehensive museum experience. 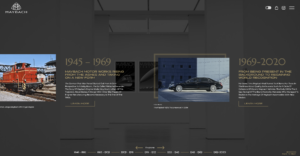 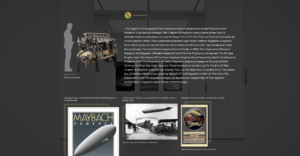 The Virtual Maybach Museum is part of the website Maybach.com. Given the relevance of Maybach.com to the global community of Maybach enthusiasts and followers of the brand, we have been able to introduce a whole new audience to the history of Maybach. In general, a platform showcasing the many facets of the Maybach brand, its history is one of them, had not existed until now.

We genuinely believe that those who share the tinkering, innovative Maybach will feel empowered when learning about the obstacles and adversities Wilhelm and Karl overcame before leaving their footprints on our shared history. Lastly, we are certain that Wilhelm Maybach’s moving story serves as an inspiration for those overcoming adversities and seeking to develop their full potential. 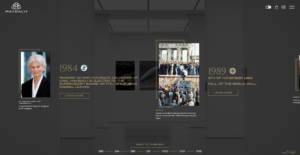 The Virtual Maybach Museum is accessible to everyone with internet access. As part of our virtual museum launch strategy, an extensive communications campaign centered around Wilhelm Maybach’s 175th birthday featuring a set of digital, as well as traditional printed postcards depicting the chapters of Wilhelm’s life and career was crafted and subsequently published. The approach of fusing analog and digital storytelling was realized through QR codes which led visitors to a blog post depicting Wilhelm Maybach’s life on the Maybach Foundation homepage and then referred them to the newly launched Virtual Maybach Museum. This campaign aimed at providing an interactive, yet simple visitor’s journey for all audiences following the Maybach Foundation and its heritage projects.